Compassion & Choices secured a landmark victory with the settlement of Almerico et al. v. State of Idaho et al., a lawsuit filed in 2018 in Idaho Federal District Court on behalf of four women challenging an Idaho law that voided the living wills–also known as advance directives–of all pregnant people. Under Idaho's interpretation of the 2005 law, a pregnant person’s advance directive was invalid regardless if they refused treatment or requested all possible life-sustaining treatment.

The suit challenged the law as a violation of Plaintiffs’ constitutional rights to medical decision-making and bodily integrity, gender equality, and freedom of speech. The January 2022 settlement required Idaho state officials to create a new advance directive template without the pregnancy exclusion and to notify the more than 40,000 people who filed an advance directive with the Idaho registry of this change.

The settlement and court ruling that precipitated it demonstrate that these laws are unconstitutional and harmful to pregnant people and their families. Everyone should have the right to plan for their end-of-life care, regardless of their pregnancy status.

Compassion & Choices achieved a first-of-its-kind victory in 2021 after challenging a pregnancy exclusion in Idaho’s advance directive law. This historic win resulted from the filing of a 2018 lawsuit on behalf of four women of child-bearing age in Idaho Federal District Court.

In 1990, the United States Congress passed the Patient Self-Determination Act which, among other things, requires medical providers to inform patients about their right to execute an advance directive. This landmark Act helped to ensure that a patient’s right to make an informed decision of their health care was protected, even in the event of incapacity. However, nearly 30 years after the Patient Self-Determination Act was initially passed, many states in the U.S. automatically invalidate an advance directive if the declarant is pregnant. These exclusions exist in more than 30 jurisdictions across the U.S. and are commonly referred to as a “pregnancy exclusion.” 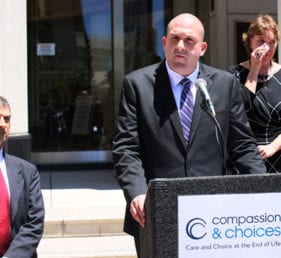 Check Out Our Factsheet

On May 31, 2018, in coordination with Legal Voice, a non-profit dedicated to advocating for women’s health care rights, If/When/How, a non-profit focused on reproductive justice, and the Idaho office of Perkins Coie, we filed a Complaint in the U.S. District Court for Idaho arguing that the Pregnancy Exclusion Clause in Idaho’s advance directive law is unconstitutional.

The case was brought by 4 Idaho women—Anna Almerico, Chelsea Gaona-Lincoln, Micaela de Loyola-Carkin, and Hannah Sharp—who are all women of childbearing age, two of which were pregnant when the suit was filed. The women had each executed an advance directive without the pregnancy exclusion language, and wanted the directions in their advance directive respected regardless of their pregnancy status.

After the Attorney General of Idaho moved the court to dismiss the case, Compassion & Choices filed their Response to Motion to Dismiss. On March 28, 2019, the U.S. District Court for Idaho filed their Memorandum Opinion and Order, dismissing the case.

On July 17, 2019, we filed an Amended Complaint. The Idaho Attorney General filed a Motion to Dismiss our Complaint on August 9th, which the court denied on November 8th.

On December 15, 2020, Plaintiffs and Defendants filed cross-motions for summary judgment. In our brief, we argued,

“The Pregnancy Exclusion violates Plaintiffs’ constitutional rights. It does so now by compelling them to make statements contrary to their beliefs and desires for medical care in the event that they become pregnant, in violation of their right to free speech, and by making their medical decisions contingent, in violation of their Fourteenth Amendment rights to substantive and procedural due process. It does so in the future by potentially nullifying their directives and voiding their right to autonomously decide what medical procedures they will request or decline, in violation of the same Fourteenth Amendment rights.”

On April 6, 2021, the Federal District Court of Idaho issued a decision in the matter, granting our summary judgment motion in part. In its landmark ruling, the court held that the pregnancy exclusion was not a required element of a valid and enforceable directive, and further ruled that the defendants’ previous interpretation of the Act requiring the pregnancy exclusion violated the plaintiffs’ constitutional rights.

“Women do not lose these rights because they are pregnant when they fall into a coma…” The court further ruled that: “[t]he pregnancy exclusion also violates the First Amendment, which prevents the Government from compelling individuals to express certain views, just as it prohibits impermissible Government censorship of speech.”

This settlement preserves the April 2021 decision and resulted in the dismissal of the Ninth Circuit Appeals. The settlement further requires Idaho state officials to make sure advance directives are honored, regardless of an individual’s pregnancy status. The measures Idaho must take include the creation of a new advance directive template without the pregnancy exclusion, and notifying everyone with a registered advance directive of the court’s decision.