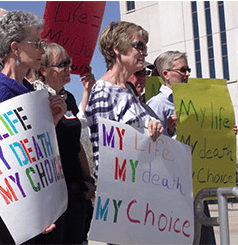 Dr. Katherine Morris, Dr. Aroop Mangalik, and Aja Riggs (“Plaintiffs-Petitioners”) asked the District Court of Bernalillo County, New Mexico to find that medical aid in dying was not illegal in New Mexico, or, that if it was illegal, prosecution would be unconstitutional.

The district court ruled that, while medical aid in dying is illegal, the prosecution of such an act would violate the New Mexico Constitution’s guarantees of “life, liberty, and seeking and obtaining happiness,” as well as its due process protections.

Compassion & Choices filed an Amicus Brief, arguing against the appeal and in favor of upholding the district court’s ruling.

Plaintiffs-Petitioners disagreed with the Court of Appeals’ decision and filed a Petition for Writ of Certiorari, escalating the matter to the New Mexico Supreme Court. On June 30, 2016, the court published its Opinion, affirming the Court of Appeals’ decision, and, unfortunately, preventing New Mexico citizens from having access to medical aid in dying.

While the Plaintiffs-Petitioners did not ultimately prevail on their legal claims, the lawsuit marked an important moment for New Mexicans fighting to access medical aid in dying. Nearly five years after the Supreme Court's decision, New Mexicans celebrated the legalization of medical aid in dying through the passage of the Elizabeth Whitfield End of Life Options Act.