“A similar argument could be made by a healthcare provider who morally objects to a medically sound healthcare decision by a patient or surrogate, or to a provision in an advance directive such as a do-not-resuscitate order or a prohibition against the use of a ventilator or feeding tube. Such an argument would upend statutory mandates in 47 states requiring the objecting provider to cooperate in the patient’s transfer to someone who will comply with the decision or directive,” said the Amicus Curiae Brief filed in Zubik v. Burwell by Jon B. Eisenberg, counsel of record with Horvitz & Levy LLP, and Kevin Díaz, National Director of Legal Advocacy for Compassion & Choices, an end-of-life care advocacy organization. 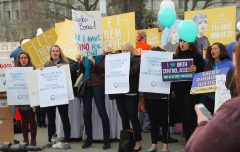 The federal Patient Self Determination Act bolsters these statutory mandates by requiring healthcare providers who receive Medicare or Medicaid funds to “ensure compliance with requirements of State law (whether statutory or as recognized by the courts of the State) respecting advance directives at facilities of the provider or organization.”

“If this Court were to embrace petitioners’ position as they articulate it….statutory mandates for transfer would become toothless and the constitutional right to refuse unwanted medical treatment would be impaired,” the brief argues. “This adverse impact on constitutionally guaranteed choice in healthcare is undeniable, given the enormous contribution of Catholic hospitals to the provision of healthcare in America.”

“A substantial number of Americans, many of whom are not Catholic, are treated at Catholic hospitals not by choice but by circumstance—for example, because no similar facility is nearby or because a medical emergency has rendered the patient unconscious and unable to choose among available hospitals,” the brief concludes. “Issues of conscience will inevitably arise in situations where patients’ healthcare decisions and advance directives are at odds with the Ethical and Religious Directives for Catholic Health Care Services (ERDs) to which Catholic hospitals adhere.”

For example, advance directives commonly provide for refusal of artificial nutrition and hydration, but Directive Number 58 of the ERDs imposes on Catholic hospitals an obligation to provide “medically assisted nutrition and hydration for those who cannot take food orally,” which “extends to patients in chronic and presumably irreversible conditions (e.g., the ‘persistent vegetative state’) who can reasonably be expected to live indefinitely if given such care.”

On May 16, 2016, the Court issued a ruling that vacated the underlying court of appeals rulings, yet failed to rule on the merits of the case.

In recent years, we have seen court cases come before the U.S. Supreme Court that expand who qualifies for protections under the First Amendment and what constitutes participation. In Little Sisters of the Poor v. Pennsylvania, the Court ruled that the federal administrative rules implementing the Affordable Care Act were constitutional. These rules allow employers to deny benefits, like contraception, which are otherwise mandated in the Affordable Care Act, if the employer is religiously or morally opposed to them. Employers may do so without notifying the government or employees who are dependent on these benefits. The decision also reinforced earlier Supreme Court rulings (Hobby Lobby, Zubik) which expanded religious protections from churches to any commercial entity seeking to impose their moral agendas on employees.

The full brief is posted here.