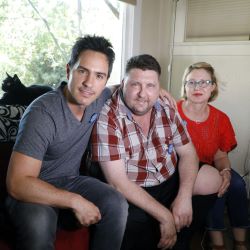 Last month, when a California judge issued a judgment invalidating the End of Life Option Act, Mauricio wanted to demonstrate his unflagging support for reinstating it by visiting terminally ill California advocate Matt Fairchild, who wants the option of medical aid in dying.

The meeting on June 8 seemed like an intimate conversation between long-lost friends. That is without counting the swarm of journalists, cameras and microphones who were present to record the meeting. In fact, Mauricio’s visit to Matt and his wife, Ginger’s, home in Burbank formally kicked off the launch of Compassion & Choices’ Latino media campaign to defend the End of Life Option Act. Fortunately, an appeals court put the state’s medical aid-in-dying law back into effect on June 15 pending further court review.

People en Español, the Spanish-language version of People Magazine in the United States with a daily online readership topping 7 million, published two stories about Mauricio’s visit with Matt. The stories came just a few days after Compassion & Choices released videos in both English and Spanish recorded by Mauricio, and an English-language video recorded by legendary civil rights activist Dolores Huerta to defend the End of Life Option Act.

“I want to talk to him, feel him … so he can know he is not alone and that we are doing everything we can to help,” Mauricio said during an exclusive interview with People en Español hours before visiting Matt, a 48-year-old retired Army sergeant with terminal melanoma that has spread to his bones, lungs and brain. “It’s so important that terminally people have the option to decide … when they feel they have had enough pain.”

“This [suspension of the law] has been a setback, of a slightly retrograde mentality; but we are here to give a fight so that the law stays,” Mauricio told HOY/Los Angeles Times en Español. “I am here to invite all the people to [join me] in supporting the law we worked so hard to pass.”

Matt asked Mauricio: “What prompted you to support medical aid in dying?”

“My grandmother suffered horribly before her death to cancer when I was 17 years old,” Mauricio responded, as Matt’s wife, Ginger, listened.

Journalists held back tears as Matt spoke about pain, weakness, stomach aches, nausea, shortness of breath and other painful side effects from the 26 medications he takes daily to help fight the cancer, but some of them also weaken his immune system.

“People don’t realize what we go through,” Matt said. “It’s scary, to think of what will happen when my time comes.”

Frowns turned into smiles as cameras rolled and shot photos of Matt, Mauricio and Ginger in the living room minutes before the actor graciously conducted multiple one-on-one interview requests on the porch of Matt and Ginger’s home.