More than 100 terminally ill New Mexicans used the Elizabeth Whitefield End of Life Options Act to die peacefully since the law went into effect in June 2021, clinicians report. The majority (90%) of those patients were enrolled in hospice and the prescribing clinicians were at their bedside. The law allows terminally ill, mentally capable adults the option to request a medication they may decide to take to die peacefully.

“This law has helped more than 100 terminally ill New Mexicans who were suffering, die peacefully,” said Dr. Joann Love, a physician from Truth or Consequences. “Just knowing that the written prescription is at the pharmacy and that it will be filled when they request it, brings patients peace of mind.  My patients are able to complete any unfinished business, say their farewells to friends and family and pass peacefully when they decide that enough is enough."

More healthcare providers and clinicians are also being trained and they are “adopting policies to support terminally ill New Mexicans who request this peaceful dying option and more residents are learning how to request it,” said Angela Schultz, Southwest Advocacy Manager for Compassion & Choices.

“Linda died peacefully by accessing the Elizabeth Whitfield End of Life Options Act,” she said. “She was surrounded by family. She swallowed the medication, was unconscious within a minute and died two hours later. It was a very peaceful death. There were no struggles.”

She said her other sister, Vicki, died ‘painfully’ because she was unable to access medical aid in dying.

“One was in so much pain,“ Bergman added. ‘While my other sister simply stopped breathing.”

Jorge Otero, a software engineer from Albuquerque, recalled the agonizing death of his father Pablo and how he begged for the option of medical aid in dying. Pablo died of cancer in 2018 after suffering from extreme bone and back pain, difficulty walking, incontinence and weakness throughout his frail body. 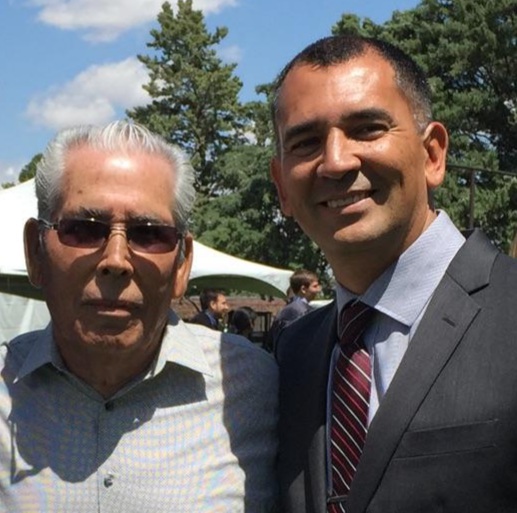 “My father’s suffering was not in vain,” he said. “His story helped to mark the importance of passing this compassionate legislation so other New Mexicans are not forced to suffer the way he did.”

The Elizabeth Whitefield End of Life Options Act includes provisions intended to improve access to medical aid in dying by not only reducing waiting periods compared to other states, but by easing time-consuming administrative burdens, according to a recent report by End of Life Options New Mexico (EOLONM).

“These provisions are being incorporated into proposed legislation in new states and used to amend existing legislation in authorized states,” said Jill VonOsten, board member of EOLONM.

Other findings in the report include:

"The Elizabeth Whitefield End of Life Options Act is working as intended,” said Rep. Debbie Armstrong, who authored the law. “Terminally ill New Mexicans are no longer forced to die in pain. They have the ability to decide when enough is enough.”

Since Governor Michelle Lujan Grisham signed the law on June 18, 2021, Compassion & Choices has trained numerous New Mexico healthcare providers about the medical practice. The organization has also created online tools in English and Spanish for patients and clinicians, including our online Plan Your Care Resource Center.

New Mexico is among 11 jurisdictions nationwide that authorize mentally capable, terminally ill adults with six months or less to live to have the option to request and receive a doctor’s prescription for medication they can decide to take to die peacefully in their sleep if their suffering becomes unbearable. The other 10 jurisdictions that authorize medical aid in dying are California, Colorado, Hawai‘i, Maine, Montana, New Jersey, Oregon, Vermont, Washington, and Washington, D.C. Collectively, these 11 jurisdictions have decades of experience successfully implementing this medical practice and represent more than one out of five people (22%) nationwide.