A Conversation with Anna Camp 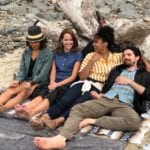 Compassion & Choices offers an in-depth conversation with actress Anna Camp, who gives us a behind-the-scenes look at her new film — Here Awhile. Anna, known for her role in the HBO series True Blood, talks about how she prepared for the role and her feelings about depicting a young woman with cancer who is making the difficult decision to use Oregon's Death with Dignity law. Recorded Tuesday, July 21, 4 - 5 p.m. ET