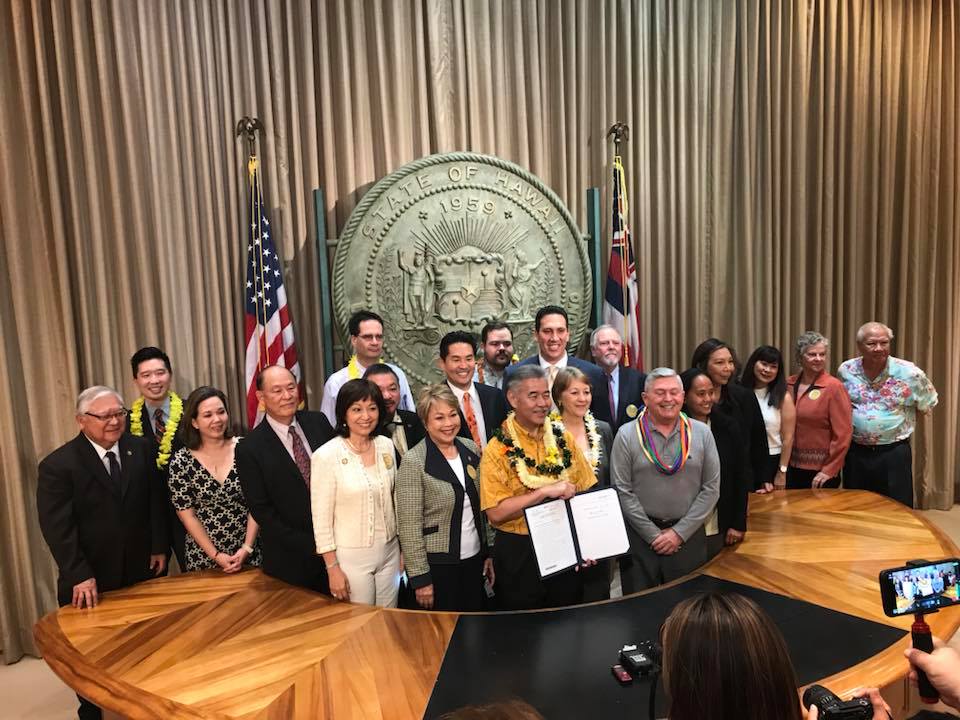 Compassion & Choices Hawai‘i thanked Governor David Ige today for signing HB 2739, the Our Care, Our Choice Act, that will give mentally capable, terminally ill adult state residents the option of medical aid in dying to peacefully end unbearable suffering. Advocates for medical aid in dying had tried to pass legislation authorizing it in the state for two decades before the Hawai‘i legislature last month approved HB 2739 by a veto-proof margin (39-12 in the House and 23-2 in the Senate). The law goes into effect after nine months, on January 1, 2019.

“This legislation has been written to ensure that the patient is in full control,” Ige said. “When i think about this law it is impossible not to think of friends and family who have struggled through a difficult prognosis...We know that our loved ones will eventually die but they don’t need to suffer.”

“I am grateful that I have lived to see this day, and I salute Gov. Ige, our lawmakers, other advocates, volunteers and allied organizations for their work throughout the years to finally bring this option to Hawai‘i,” said John Radcliffe, who has stage 4 terminal colon cancer that has metastasized to his liver. “I, along with the overwhelming majority of people in Hawai‘i, want this end-of-life care option to ensure I do not have to suffer needlessly in my last months, weeks or days of life.”

Eighty percent of Hawai‘i residents support the end-of-life care option of medical aid in dying, according to a 2016 Anthology Research Group poll.

“At long last, Hawaii’s people have achieved the 7th recommendation from Governor Cayetano’s 1998 Blue Ribbon Panel on Living and Dying with Dignity,” said Barbara Coombs Lee, president of Compassion & Choices, who was an ER and ICU nurse and physician assistant for 25 years before she co authored the nation’s first medical aid-in-dying law, the 1994 Oregon Death with Dignity Act. “For 20 years, medical aid in dying was the missing piece. Now comfort care and patient autonomy will truly flourish. The people will have peace of mind, and a full range of healthcare options at life’s end.”

Compassion & Choices Hawai‘i will spearhead a volunteer-led campaign to educate providers and the public, and ensure terminally ill adults in Hawai‘i have meaningful access to the law.

“The Access Campaign is built on our 20+ years of experience helping to implement medical aid-in-dying laws in the six other states that have authorized the practice,” said Kat West, Compassion & Choices national director of policy & programs. “There are terminally ill people in Hawai‘i right now who need this law, so it is urgent for doctors and healthcare systems to understand this compassionate medical practice and respect the decisions of terminally ill individuals who want this option for the comfort and peace of mind it brings to them.”